The Shade Tree Commission was re-established in 2010 in response to a full-blown crisis regarding our street trees. Many of our mature trees, planted early in the borough's history, have been aging out (as evidenced by the many oak removals on Ridgewood Avenue). And our maple trees, fully 67% of our street trees, have been increasingly falling victim to a deadly syndrome called "maple decline." As a result, the town has been taking down as many as 60 trees per year. An additional 80 trees were lost to the October Snowstorm in 2011, and 120 to Sandy in 2012.

Indeed, a 1937 inventory had indicated that there were 4,700 public trees in the borough. In 2013, there were fewer than 3,000. Thus, it became apparent that a major capital investment was the only feasible way to restore our urban forest. With then Mayor Hughes' steadfast support, the council promised the commission enough money to plant 1,000 trees over 5-years' time. Considering that every tree planted costs about $300, this is a substantial investment! 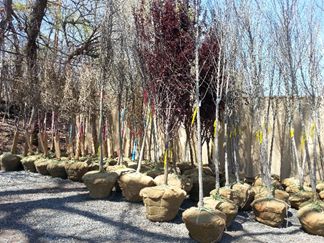 This picture shows some of the 115 trees that will be planted in honor of Arbor Day this year as part of that 5-year plan. They will join an additional 260 saplings planted since the fall of 2014. What this means, of course, is that there will be almost 400 new trees boroughwide that need to be properly cared for!

Obviously, we are planting with an eye to posterity; yet we know that the average street tree in NJ survives only 7 years! But, fortunately, Glen Ridgers really love their trees and are more than willing help. So scroll down to see what simple things you can do.

First and foremost, saplings need water - about 5 gallons per week in hot weather. The trees being planted this year will have gator bags that can be filled from a hose through a slit on the top (under the flap). Those without gator bags can be properly irrigated with a slow drip from a hose to the base of the tree, or from water slowly poured from a watering can.

Going on vacation? Let the Commission know at shadetree@glenridgenj.org, and we'll water your tree in your absence!

Add Mulch: But Not Too Much!

The new saplings will be properly mulched when they are planted. But those planted previously - indeed all street trees - need a 3 or 4 inch doughnut of mulch around them - not only to provide moisture, but also to protect them from weed whackers and power mowers. WHAT TREES DON'T NEED ARE DEADLY MULCH VOLCANOES!

Piling mulch against a tree is like leaving a wet mop on a wood floor: The constant wetness makes the tree vulnerable to rodents and insects. More importantly, mulch volcanoes encourage roots to grow upwards, instead of properly developing in the ground.